A sunny, rather hot Saturday in August. It could have been like any other Scandinavian summer night when the sun never seems to set, except that it was not. It was special, because it was the wedding day of my brother.

The wedding dinner was organized at the Mielcke & Hurtigkarl restaurant, which is highly praised by critics from all over the world. For example, Condé Nast Traveller reckons this restaurant is one of the 25 reasons to visit Copenhagen. Others say Mielcke & Hurtigkarl has earned its place in the league of emerging creative and contemporary chefs of Denmark –a country whose food scene was until recently mainly known by Noma.

As I am sure you can imagine, living in Paris can make one obnoxious about food. I confess that at times I fall into that category and therefore I admit my expectations were very high regarding the dinner. And now, please listen to me. For your next weekend trip, book tickets to Copenhagen and reserve a table at Mielcke & Hurtigkarl. Yes, it is THAT outstanding, and the following photos will prove my statement. 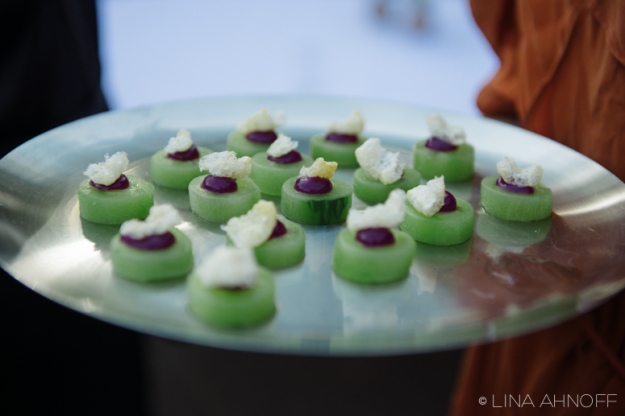 The amuse-bouche were served with an excellent crémant from Bourgogne (France), which proved that a high-quality crémant can be as good as champagne (or even better!).

After the garden we moved inside and begun with the first starter: a terrine of hake, rolled in A.O. Nori seaweed and served with compressed cucumber, pea crumble, green vinaigrette, herb oil and pea sprouts, accompanied with Portuguese white Regueiro Alvarinho Minho from 2011. 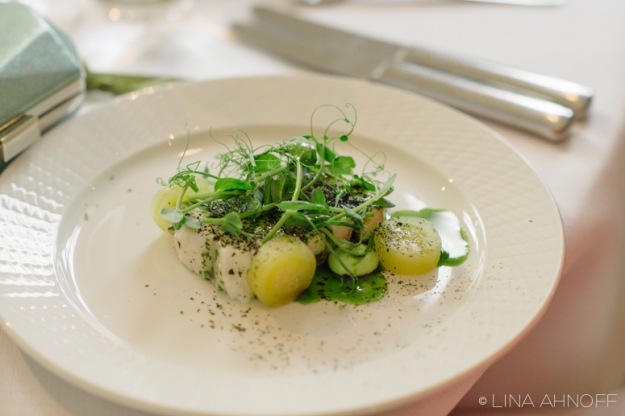 For the second starter we had a smoked mackerel with small new potatoes braised with summer truffle, radish and herbs from the garden, and wild garlic sauce. As each dish had its own wine, we were now served an excellent French white Saint Veran Bourgogne from 2011. 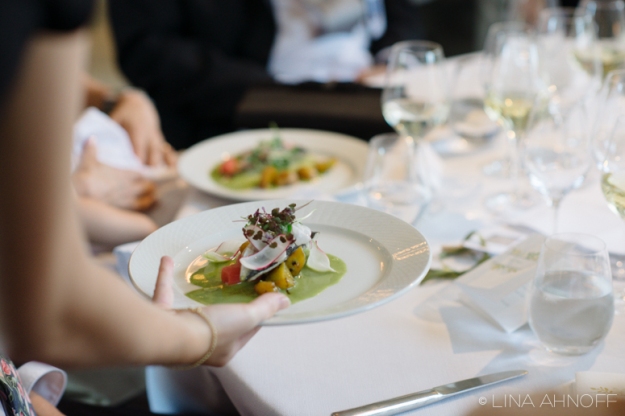 For the main course we were spoiled by a braised veal breast rolled in fried onions
and ash, served with garlic-flavored celery fondant and red wine sauce of smoked marrow and cranberries. The accompanying red wine was Spanish Oliver Conti Catalunya from 1999. 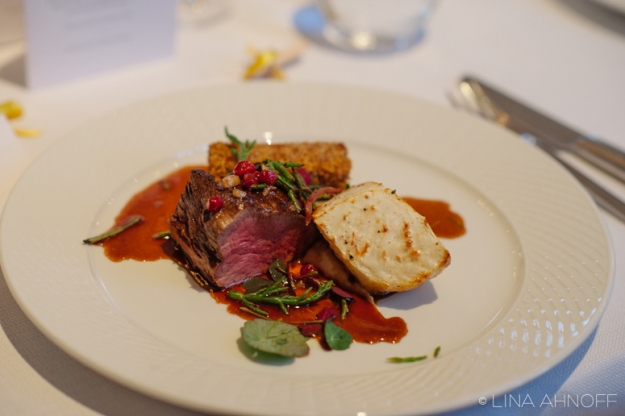 Instead of a traditional wedding cake we had a very creative and delicious yogurt sponge cake with cocoa crumble, fresh berries and berry preserve, which was served with French sweet wine Chartreuse de Coutet Sauternes (2007).

I could not have imagined a more fantastic restaurant choice. Everything was simply perfect, beautiful and delicious. Just as the dream wedding dinner is supposed to be! If you have a chance, make a stop here the next time you are in Copenhagen:

PS These wonderful photos were taken by the official wedding photographer Lina Ahnoff. Talking about talent! In addition she is a well-humored, kind woman who loves people and glimpses of life. Highly recommended! http://linaahnoff.com/