The Scoot flight from Singapore to Kuching landed a little after 9 pm on a Monday night. The money exchange bureau at the airport was closed  but a taxi driver accepted Singaporean dollars. Our journey to the Waterfront Hotel started. Everything looked much more developed than we had expected, and Kuching seemed like a big town. Everything felt very different from what we had seen on our previous trips. There seemed to be a balanced mixture of traditionalism (ancient temples etc) and modernity (fast-food chains etc). There is a French word “dépaysant”, which loosely translated means “exotic, unfamiliar”, and this is indeed how we felt.

The check-in at the Waterfront Hotel was friendly and professional. We were very hungry but the only way to eat was to order room service (overpriced, especially the beer, but tasty). Our room was clean, modern yet a bit bland. The room could have been in any of the world’s 4-star hotels.

Like often, everything looked brighter in the morning. We really liked our view. 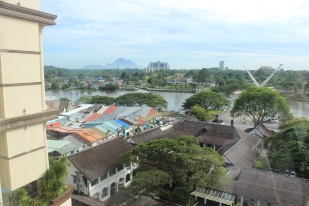 There was the Indian neighborhood on the left, the 19th-century Old Court House Complex in front of our hotel, the old Chinatown on the right, and more hotels on the far right.  The majestic Sarawak river calmly flew in front of us.

Unfortunately after the breakfast we realized our daughter had fever. It kept coming and going during three days but stopped -as a doctor we had consulted had suggested- as abruptly as it had started after 72 hours. This however made us lose a few days so during her sick days we only walked around in different parts of Kuching and met our guide-to-be James to plan an efficient program for the rest of our stay. The elections that took place in Malaysia during our stay added an extra element of excitement to our already adventurous journey. The streets remained calm in Kuching, the capital of Sarawak but many places were closed and everyone we met was holding his breath while waiting for the results. 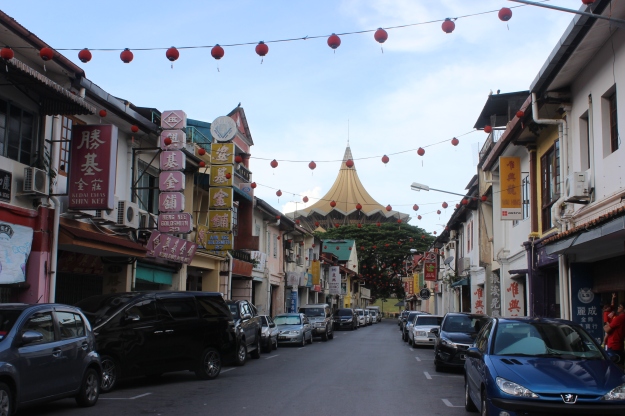 We ended up staying one full week in Kuching. During the first days we kept wondering whether we should move to another hotel or not. We usually like smaller hotels with a bit more charm combined with local touch, and the Waterfront Hotel just felt a bit dull. In the end we decided not to change: the staff was very friendly and the breakfast was great, but more about this in another post!

Kuching grew on us. We loved the fact that there was no tourist invasion. We were literally on the other side of the planet. A lot of the times it was only us and the locals. In retrospect I can say that Kuching was so different from anything else we had seen before that it took some time to get adjusted. On the other hand this is exactly what I love about traveling and why we travel –the goal for us is to find places that are “dépaysant” (exotic, unfamiliar, new, fresh, different…) and Kuching was all of that and beyond. We loved Kuching.

Previous posts about our journey (in chronological order):