In case you missed it, Paris International Agricultural Show ended last Sunday. It is an annual, nine-day long exhibition that attracts nearly one million visitors from France and elsewhere. The president of the French Republic always pays a visit during the first day, and this year Holland spent seven hours inside the Show. This is how important the Show is to France.

We decided to spend last Friday evening at the Show and very much enjoyed ourselves. In fact, I thought that the Show was extremely fascinating and well done. The offer is huge and diversified, focusing on four main sectors: livestock, nature, gastronomy and agriculture as a profession. One can taste milk, get free samples of cat and dog food, learn how to cook, watch animals competitions, change a career (schools and employers are present to recruit), explore food products from different parts of France, including wine, etc. In addition, there are restaurants serving regional specialties, making the Show an excellent way to learn about France’s rich gastronomy. 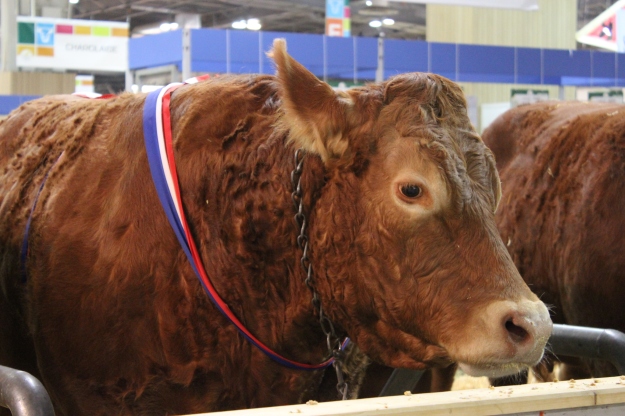 We spent most of the time admiring cows and beef, and believe me when I say that some of them were enormous. In fact the biggest animal (a bull) of the show was called Le Fêtard (Party Animal) and it weighed 1691kg. Le Fêtard  was sleeping while we visited him, so we moved to my favorite cattle breed “Charolais”: I love their features and that curly white hair. 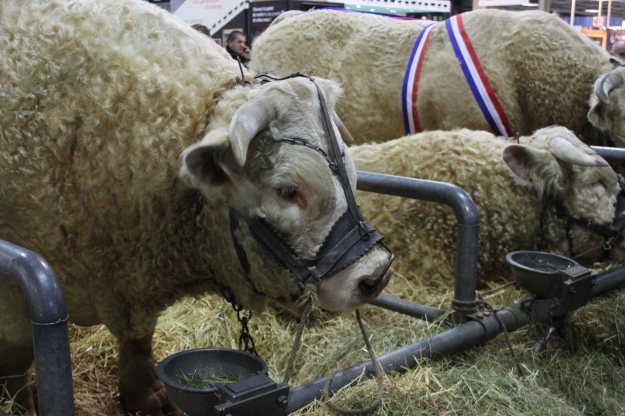 As you may know, every year there is a showstopper at the Show. Two years ago when I first visited this Show it was Valentina, and this year it was Bella, a beautiful, elegant seven-year old cow from Tarentaise breed. It was no doubt that Bella was the star of the Show, because when we found her, she was surrounded by dozens of people calling her name and trying to catch the best shot of her. 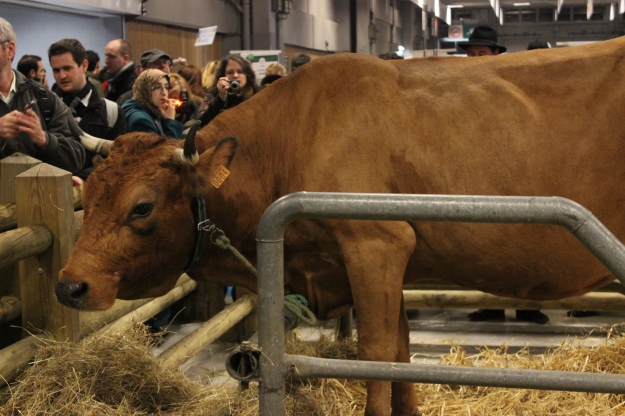 In fact, if you go to the website of the Show, you can find a lot of information on Bella and her breeder and daily life in the Savoy region of France, near the Alps. The website continues to reveal that “Bella has a very easy nature, and is gentle and curious” and “Bella has two jobs: producing milk for Beaufort cheese and maintaining the Savoy landscape”. It almost feels like reading someone’s CV…!

This time we did not stay to eat at the Show, simply because no-one was serving côte de boeuf. It was a pity, because two years ago we ate a really tasty steak at the Show. Well, maybe next year!

Even if it is too late for this year, do not miss the Show next year! It is worth a visit, for many reasons. There are many activities for children, too.

Note: I love animals but I also have a professional interest toward agriculture because I recently wrote for a publication related to agribusiness. The publication was not about France but we did a lot of comparative analysis and France came up several times. As many of you know, France is very proud of its gastronomic heritage and diversity, and agriculture is viewed as a sector of prestige. And as the Show shows, French agribusiness receives a lot of state-driven marketing support, which is fantastic. Image building is vital for growth, maybe even more than we realize. (I just realized myself that I don’t think I know the type of cheese Bella’s milk produces and I should go and buy some. See! Bella is not only the star of the Show, but also the best PR person along with President Holland of course…!)

2 thoughts on “The biggest farm of Paris”