A lot has been said about Parisian attitude and yet I think the service has been getting better over the recent years, there are still occasional reminders of this well-known reputation. Last Friday we witnessed it again.

Amici Miei is one of the best Italian restaurants serving pizza in Paris. Le Figaro ranks Amici Miei among the seventeen best pizzerias in Paris in its November 2011 review and Le Fooding confirms it.

While I was waiting for my husband to park the car I noticed that no one was really paying any attention to my arrival. There was a football match which seemed more important than the customers (however, when someone they knew walked in, this person got a VIP service…). On the positive side, there were many customers waiting to get a table, but we got ours the moment my husband walked in.

We ordered two verdura pizzas and they arrived crispy, thin and nearly burnt –the way I like my pizza. Vegetables were delicious, mozzarella was particularly tasty and tomato sauce seemed to have something extra that made it better than elsewhere.

A bottle of red, Cantina Di Santadi Grotta Rossa DOC 2011, was recommended by our waiter (18€). The wine is made exclusively from carignano grapes that give this Sardinian red wine a liquorice aroma –a very good choice! 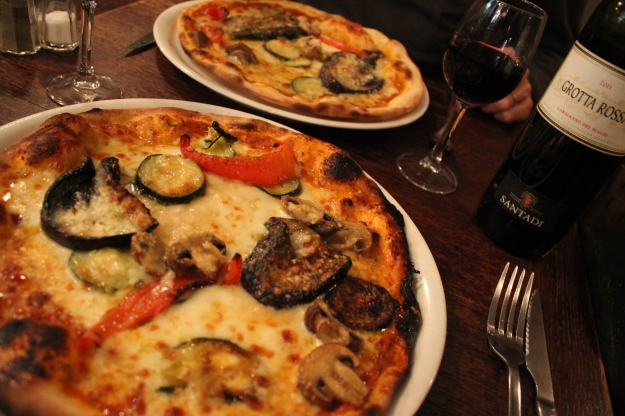 In the end my husband ordered a grappa. We waited, and waited. The restaurant was still full and the waiters were running around and talking to each other in Italian. This obviously happens a lot in Italian restaurants, but there was something more authentic that gave us a real feeling of being in Italy. After about twenty minutes we gave up and ordered the bill. The waiter came, asked if the grappa had been served, and we said no (thinking he will bring it with the bill). Few minutes later the bill came but no grappa. Ok, no big deal, and it was more amusing than rude.

We paid and left, puzzled what had been going on in the waiter’s mind. This small incident, combined with that cold welcoming at the arrival initiated a conversation between us about this particular arrogant attitude. After all, even if Amici Miei is highly ranked, it is only a pizzeria, not a Michelin-star restaurant. I sometimes feel that restaurant owners assume that in order to gain respect in Paris they have to be rude. I so do not agree. I simply think it is a pity to go to a restaurant that lacks basics of customer service.

All this said, we will return because the pizzas were very, very good. Regarding the service, we will be prepared and expect nothing, so it will be just fine.

Other pizza reviews by Pearlspotting: Da Vito: Cool and Affordable Pizzeria and La Briciola: pizza of “something missing”