Bretagne (Brittany) is one of my favorite regions of France. I love the seafood and the scenery the region offers. I am maybe partially subjective (my husband’s father’s side is Breton), but just a tiny bit… Bretagne is an amazingly stunning region full of cute fishing villages, numerous historic sites and friendly, down to earth people. The region is well preserved and it has more coastline than any other region in France (almost 3000km).

When we have an opportunity to go away for a short weekend, we often choose Cancale. Cancale is exactly 396km from the center of Paris and if there is no traffic, it is possible to do the journey in four hours. We usually go by the A13 highway (which passes by Normandy) and drive until Pontorson. Right after Pontorson we turn right, direction Saint-Georges-de-Gréhaigne. After driving by another small village, Saint-Broladre, we watch out for a small sign “Chapelle Sainte-Anne” (be attentive, it is easily missed). Once we arrive at Chapelle Sainte-Anne we leave the car and walk to the sea (which is very near by) to admire Mont Saint-Michel. Wow, what a view! And so close to Paris! From Chapelle Sainte-Anne, Cancale is only 24km away. I strongly recommend choosing this route because it goes right by the sea and passes by oyster-farming villages. As a bonus, you have Mont Saint-Michel on your right-hand side most of the time (during the clear skies).

Cancale has a lot to offer to a tourist in terms of accommodation and restaurants, but I will hereby share our usual addresses.

For sleeping, we usually opt eith 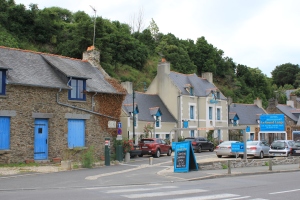 er for Le Querrien (starting at 59€ low season) or for Le Grand Large (starting at 45€ all year round). Both hotels are by the sea (the port) and have a restaurant. Le Querrien has three stars and Le Grand Large to me seems more like a two-star hotel. The latter has a free parking in front of the hotel (see the photo on the left). Both have a friendly personnel. It is probably fair to say that Le Querrien is more comfortable in terms of amenities, whereas Le Grand Large is more like a charming old grandparents’ house. Prices vary quite a lot according to the season and it is best to call them up. For example, last week we were at Le Grand Large and paid 50€ for a room with a sea view (the price they quoted on telephone was more interesting than the Internet prices on hotel.com and similar websites). We thought 50€ was very reasonable.

My previous articles What to pack for Bretagne (Brittany)?  and  Eating oysters in months without “r” mentioned one of our favorite Cancale restaurants, Au Pied de Cheval, Cancale.  We usually start here and fill our stomachs with a dozen of oysters. Last Thursday we left Paris at 10h and arrived in Cancale at 15h30. Good thing about Au Pied de Cheval is that it is open all day long, so there is no stress about arriving in Cancale at a certain time. For dinner, we usually go to another restaurant also on the main street (by the port) called L’huitrière, Cancale. I have been to many other restaurants in Cancale, and don’t mistake me, you can eat well everywhere! Should you wish crêpes & galettes, I recommend Crêperie du Port, Cancale. 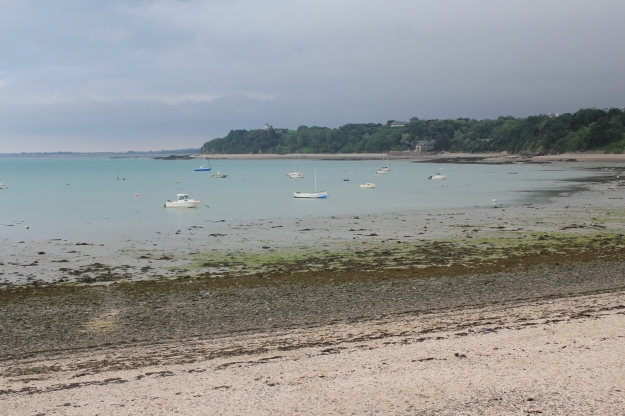 If you wonder what else there is to do in Cancale apart from eating oysters, I can tell you that there are fantastic beaches when you drive toward Saint-Malo by the scenic northern road. For hikers, there is also a GR34, which offers Saint-Malo on one side and Mont Saint-Michel on the other side. As we like jogging, we always take running shoes with us and take advantage of the clean seaside air. (Tip for runners: if you are in the center of Cancale facing the sea, start running toward the East, Mont Saint-Michel, along the bay. You can run for about 25 minutes along the beach (you will see when you cannot go further) and once you turn back and arrive in Cancale, it will make a nice 50 minute run)

Otherwise, some other great things to do in Cancale (and in Bretgane in general) are observing the tides (the tide around Cancale is one of the most important ones in the entire Europe) and watching fishermen collecting oysters, mussels and other seafood.

If you have been to Cancale, what do you think is the best thing to do there? Do you have a favorite hotel or a restaurant? Does observing the tide seem like a pleasant pastime to you?

4 thoughts on “Cancale: my favorite weekend trip destination from Paris”