If you are a fan of oysters, you may have heard that you should only eat them in months that are spelled with “r”. This gives you eight months (from September to April), but doesn’t explain what to do when you visit an oyster region outside of that period.

I just returned to Paris from a fantastic long weekend in Bretagne (Brittany). Our first stop was Cancale, a famous and cute oyster-farming town. If you read my previous post What to pack for Bretagne (Brittany)? you remember that Cancale equals oysters. For me, there is no going to Cancale without eating oysters. But when you are traveling outside the “r” season, the question “to eat them or not to eat them” exists. My short answer to the “r” dilemma is this: it is up to your taste!

As oysters breed during the months without “r” (=the summer), they become milky (=laiteuses). Texture becomes softer, and when you touch the oyster with a fork it may seem decomposed. Compared to a “winter oyster” (months with “r”) , the liquid of this “summer oyster” is not as clear. If you are not very familiar with oysters, you may mistake milky liquid and soft oyster as signs of an oyster gone “off”. Yet it may not necessarily be the case, I do admit it can be difficult to differentiate a good and a bad oyster. 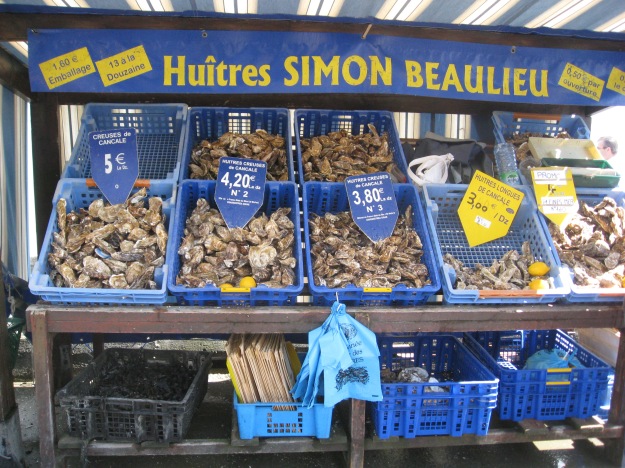 We arrived in Cancale last Thursday and went straight to Au Pied de Cheval. We know this restaurant really well, so we knew that if oysters are good and safe to eat somewhere at this time of the year, this is the place (the owners are oyster farmers). We ordered two portions of “douzaine” (2 x 12 oysters).  They arrived big and beautiful, smelling sea weed. Even if the oysters were not as rich in sea-water taste as usually, they still gave us a very pleasant lunch. It was only the last oyster that I touched and felt unsure of eating (yes, indeed, it was milky and very decomposed). I could have maybe eaten it and been just fine, but why to risk.

While traveling in Bretagne, I once again talked to locals who confirmed my feeling and previous knowledge. The problem of eating oysters in months without “r” is not so much about getting sick simply because it is summer, temperatures are higher hence more bacterias, etc., but more about one’s personal taste. Oysters do have a different taste in winter compared to summer. In winter they do taste more like the sea… On the other hand, oyster-farming towns sell oysters all year round, so that also tells you that the demand is always there.

My personal advice is that if you love oysters and know the place where you are going to eat them, go for it! However, if you are not familiar with oysters in general, then don’t do it. Hating oysters because you ate then when they were not at their best would be a pity.

But what do you think of all this? If you love oysters and eat them often, please tell me about your personal “oyster strategy” and if you follow the “r” school!

Tomorrow morning we leave at 8am for Cancale, which is a famous oyster-farming village in Bretagne. The drive will take just over four hours from Paris and passes by the spectacular Mont Saint-Michel.  After Mont Saint-Michel, it will be another 50 minutes to reach Cancale.

I have not been to Cancale since November last year and it is about the time! Upon arrival, we will have lunch at the restaurant Au Pied de Cheval. Lunch that consists of oysters and bulots (a type of sea snail you eat with mayonnaise). After the lunch we will walk on the beautiful beach until it is the time to have some more oysters! Oysters and more oysters, this is Cancale.  The reputation of the Cancale oysters goes back to the Roman times. This is how good they are. Oysters and Cancale, serious business.

The departure is early, so I need to start packing. This photo summarizes well a trip to Bretagne: one should prepare for some rain, bring maps as there are many exciting, historical sites, but most importantly, one should bring a special knife to open oysters and a special glove to protect the hands from being cut. If you pack these things, your trip to Bretagne will be successful!

One more intense day of work, and then a long weekend in one of my favorite parts of France.

Delicious, healthy food is expected. Probably it will rain but that is ok. I don’t know if I can swim in the sea, but I will bring the bikinis just in case.

Anybody wants to guess where this place is? In my opinion, it is one of the most beautiful regions of France, and that says a lot! 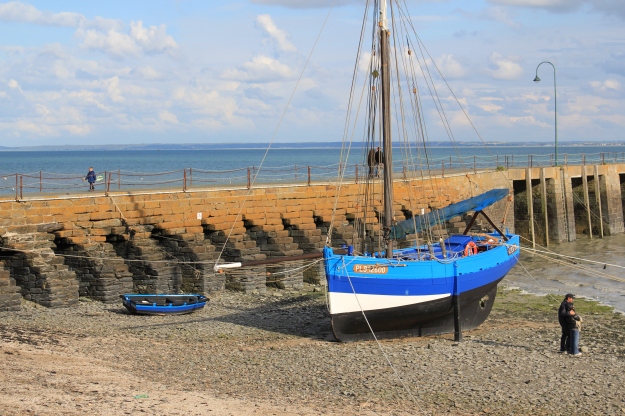