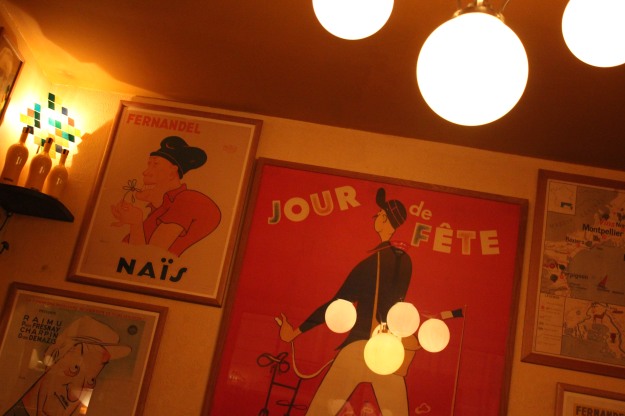 It was Jour de Fête, or should I rather say Week-end de Fête?

On Saturday we had a Berlin-based friend over for an apéritif. From our apartment we continued to a very Parisian bistro called Chez Janou in the 3rd arrondissement (http://chezjanou.com/). I know this bistro gets mixed reviews, the quality of food is not always consistent and the waiters can be a bit brusque, but we keep going there (and taking foreign friends there) for the following reasons:

1. It has that vieux Paris atmosphere and you would not be surprised if Édith Piaf sat next to you. Almost like in Woody Allen’s Midnight in Paris!

2. Food is Mediterranean flavored and really, what can I say: tomato chèvre starter immediately brought sun shine to our evening, the duck tasted like any duck that has had a happy life, my husband’s entrecôte was very tender and the mousse au chocolat the table next to us ordered was HUGE!

3. Their kitchen is open until midnight (unlike most French kitchen that close around ten in the evening), so keep this in mind the next time you are in Paris and wonder where to dine…

On Sunday evening we were invited to a collection preview of a Paris-based Finnish designer, Petteri Hemmilä. The collection was displayed in a beautiful, edgy atelier of a Corsican-born artist, and while the Eiffel Tower was blinking, we sipped wine and learned about Petteri’s new adventures. As he merits a separate post on his work, I will be doing it very soon.

As we left the atelier, got out to the snow and rented the Autolib, we suddenly felt like visiting the South India again and started driving toward the Gare du Nord. The weekend ended with a South Indian thali and an onion rava masala dosa. Saravana Bhavan (http://www.saravanabhavan.com/) is an international chain that started in Chennai, Tamil Nadu, in 1981, and since then they have expanded to Muscat, Dubai, Ontario, New York and many other cities around the world. In Paris they opened in 2010 and since our first trip to the South India (December 2011-January 2012) we have been regular, very happy customers!

Voila. A new week has started and at least one party is scheduled. Paris is a city of surprises and every day often becomes Jour de Fête, so stay tuned!