The town where I was born played an important role in Finnish independence battle, so rebellious places around the world in general intrigue my curiosity. Since I first heard about Hora Sfakion, it has been on my must-do list.

Hora Sfakion is the capital of the Sfakia region, located behind the Lefka Ori mountains in the southwestern part of Crete. It has been an important resistance center against the Turks and the Venetians, thus the heart of the Cretan independence. Lonely Planet Crete (2012) writes “the more bullet holes you see in the passing road signs, the closer you are to Hora Sfakion, long renowned in Cretan history for its rebellious streak against foreigners.”

Even if very little remains of the rebellious days, Hora Sfakion has its own personality that is very much alive particularly in local kitchen. For example, everyone visiting Crete and especially the western part will hear about the Sfakian pie and other treats. The village’s remote location has indeed allowed it to maintain its distinctive culinary culture that is now famous all over the island.

Today this village of some 300 inhabitants is calm and picturesque. The time has stopped, it seems, and locals mainly live from tourists who use Hora Sfakion as a base for hiking trips in the nearby gorges.

We stayed four nights in Hora Sfakion and tried to scratch below the surface to understand what being a Sfakian means today. Along our stay we met many lovely people who seemed proud and slightly reserved, and who never hesitated to smile. Xenia Hotel’s manager George was one of these true Sfakians we met, and willing to share some of his stories.

George described Sfakians as “friendly and sensitive” but continued “do not make enemies here”. When I directed the discussion toward famous vendettas, asking if they still exist, he smiled and responded “no”, but continued laughingly “you never know.” 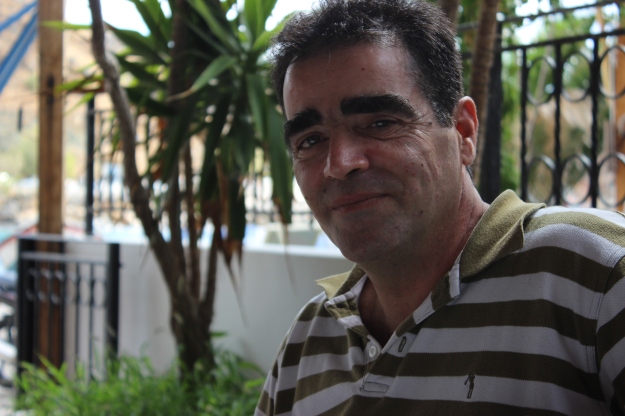 We then talked about the World War II and how difficult the life had been in this mountainous region immediately after the war. People had guns and traumatizing war memories, but no food. Before I realized, I was listening to a fascinating story of a group of Sfakians walking all the way to the Preveli Monastery, located 50 km to the east from Hora Sfakion. The Sfakians had come to the point where they were starving to death and something needed to be done. They knew that this important, rich monastery possesses over 2000 sheep, so off they went to steal some of them. The story goes that during several “missions” over 300 sheep were brought to Hora Sfakion to fill hungry stomachs. Apparently the monastery, regardless of its suspicion toward these rebellious people, remained powerless, because no authority would be able to confront the Sfakions. 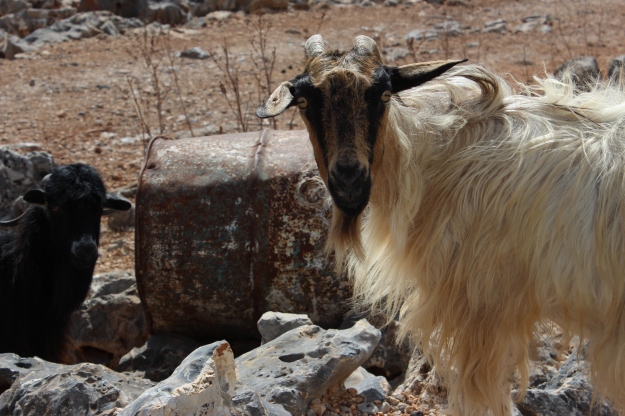 Nowadays, the life in Hora Sfakion is much more secure and comfortable, but the Sfakians have kept their playful and rebellious mind. The last story that George shared included once again sheep. George himself owns sheep but does not keep counting them on a regular basis. Once it happened that he was invited to a delicious lamb dinner by some local Sfakians. The evening was delightful, and everyone happy. A week later George met the hosts, who finally revealed the origin of the lamb dish by asking if he had appreciated the way they had prepared the lamb, emphasizing the words “your lamb”… I asked George if he got upset, and he responded truthfully “we spent a wonderful evening together and the dinner was delicious, so who cares about one sheep. If you asked me, I would give you one”!

So, if you are searching for an original holiday destination, think about Hora Sfakion. We are surely going to return there one day, and I am sure that the stories will get more fascinating the better we learn to know the famous Sfakian people…

2 thoughts on “Hora Sfakion: one of a kind”